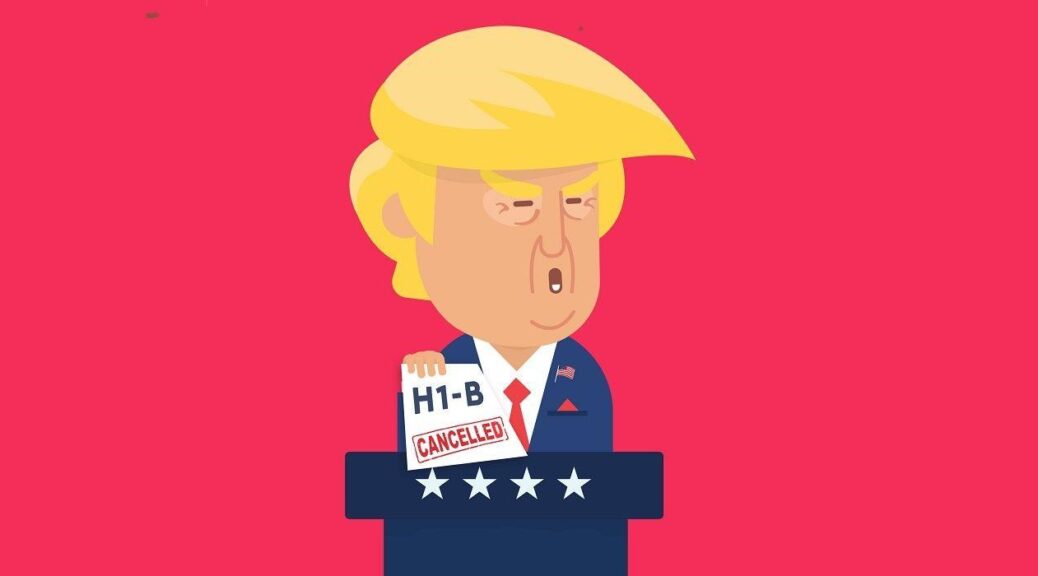 One popular yet disputed economic belief is that through reducing foreign workers in the U.S., native wages and employment will increase. Trump uses this economic theory to fuel his campaign. Most recently, the Trump administration, in an attempt to help reduce foreign workers, declared dramatic changes to the H-1b visa program on October 6th, this past Tuesday.

The H-1B visa was originally created to allow U.S. companies to temporarily employ high-skilled foreign workers (generally graduate level workers) for highly technical positions “such as in IT, finance, accounting, architecture, engineering, mathematics, science, ect.” [1] These visa’s allowed companies, especially tech firms, to find the talent that was otherwise not available from the U.S. workforce. This allowed U.S companies and the economy to function at full power.

The reason behind the recent change?

This program has faced criticism because some believe it hurts and does not prioritize the American workers. The basis of this argument is that the H-1B program brought in competition and an alternative to hiring U.S workers. According to the U.S. Homeland Security, H-1B program has been a “detriment” to U.S. workers and claims that up to half a million of H-1B visa holders have taken the jobs of and replaced American workers.  These issues caused the Trump Administration to make significant changes to the H-1B program.

It is also important to note that Covid-19 and its impacts on American workers further motivated the Trump Administration to make these changes. Another side note is that while the reasons for changing the H-1B program are legitimate, many believe that Trump’s decision, considering how close it is to the election, was politically motivated.

So what changes have even been made?

First off, wages for visa recipients are going to increase; in result increasing the cost of U.S. companies to hire foreign workers. Starting now, the Labor Department will have new increased wage requirements for H-1B workers. For example, “an entry-level electrical engineer in San Jose, Calif… would be required to receive a salary of $127,042, compared with the current requirement of $88,712 according to Labor Department data.”[1] These new rules will take place immediately.

Furthermore, these changes also included new rules that will make the visa more selective and less frequently distributed. To apply for a H-1B visa, workers must now have a degree in a “speciality occupation,” while before only a college degree was necessary. Moreso, candidates must have a “body of highly specialized knowledge.” While this is somewhat of an arbitrary requirement, the message is that the application process is getting significantly more selective. These new visa rules will go into effect on November 7th.

Who will this affect?

The new changes will have a drastic effect on foreign workers, and U.S. Companies. Foreign high-skilled workers will obviously be affected by this, as the chances of landing a job in America will significantly decrease. It should be noted though current H-1B visa holders will not be immediately affected by this change. Obviously, these changes will be very detrimental to many U.S companies, especially in the tech sector. Businesses in the tech sector relied on these H-1b workers and with these new changes, talent will become more limited, thus recruiting will become more difficult. Lastly, for the American workers, the effects of this change are unknown and controversial; some believe this change will help the wages of American workers yet others think the differences will be minimal and the only real effect of these new changes is that it will hurt U.S. companies.

Will these changes stand?

This is very debatable. While I’m sure the Trump administration would love for these changes to remain, many experts believe that these changes will be challenged in court soon. Thus, the fate of the H-1B visas are undetermined as of now.